i. Orbiting a planet of his own imaginings in East Anglia, WGS recalls Browne’s observation that there is no antidote against the opium of time.

And since the heaviest stone that melancholy can throw at a man is to tell him he is at the end of his nature, Browne scrutinizes that which escaped annihilation for any sign of the mysterious capacity for transmigration he has so often observed in caterpillars and moths.¹

CIRCLE 2: When Jeremy and I first moved to London from California seven years ago, we were always broke and the city seemed to be to blame. We’re still always broke but we don’t begrudge the city’s thirst for our resources quite so much anymore. We’re thirsty a lot ourselves. Jeremy wrote a blog entry called dog days are over. 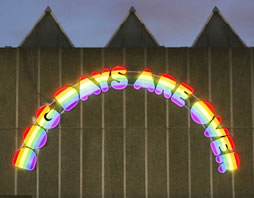 Back then the phrase was emblazoned on exterior of the Hayward Gallery, a sculpture by Ugo Rondinone. That’s what it looks like — a rainbow on concrete — and at around the same time Florence and the Machine had that song, so it sounds a bit like that. Florence Welch would apparently pass the Hayward daily, so there is a line of influence here. I’d like to imagine that in turn Rondinone was inspired by the opening line of The Rings of Saturn (“In August 1992, when the dog days were drawing to an end, I set off to walk the county of Suffolk, in the hope of dispelling the emptiness that takes hold of me whenever I have completed a long stint of work.”), but there’s nothing to indicate that was the case.

‘Dog days are over’ has stuck with me: ironic, optimistic, melancholic; a sweet, sad comfort.